Path of the Sexual Shaman:  documentary

Women of the Light: The New Sacred Prostitute book

In 1995 I envisioned, edited, and published WOMEN OF THE LIGHT: THE NEW SACRED PROSTITUTE, a book in which nine women in various contemporary sacred-sexuality roles share their life and work.

Response to that book brought me in contact with many more people in similar roles. After two years of filming and editing, the filmmaker Sarah Sher and I completed THE SACRED PROSTITUTE, a 90-minute, in-depth documentary on women and men who have stepped outside of oppressive religious dogmas and are teaching others a new/ancient paradigm of sex and spirit. Mary Magdalene has become the “patron saint” of some of these visionaries. Now the documentary, a special section on Mary Magdalene, and inspiring outtakes are available in a special 2-DVD set entitled THE SACRED PROSTITUTE / MAGDALENE UNVEILED.

My most recent documentary, PATH OF THE SEXUAL SHAMAN: TEACHINGS ON ENERGY, ORGASM, AND WISDOM, takes us deeper into our sexual nature and how it can be an integral part of stepping onto a shamanic path of transformation. Energetically dancing with earth-wind-water-fire, with plants-animals-crystals, and with the “sacred ones,” we can develop our abilities to merge into oneness with another.

These documentaries and book are a view of a transformative paradigm shift on the nature of existence. I encourage you to explore them.

TO PURCHASE: ALL 3 AS A SPECIAL 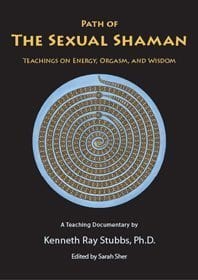 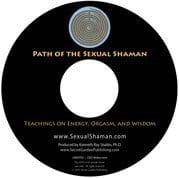 PATH OF THE SEXUAL SHAMAN:
Teachings on Energy, Orgasm, and Wisdom
Documentary

What is shamanism?
What is a sexual shaman?

To transform an energy pattern, a shaman must first literally
merge with it. Likewise, at the moment of orgasm when we are
making love with another, we merge energetically with our partner.

To develop shamanic abilities, we need energy — lots
of energy. But it is not the type of energy we receive from
food. We need a more primordial form of earth-wind-water-fire
energy. Sexual orgasm is one of the primary ways to generate
such an energy.

Expanding our understanding of shamanism and our sexual nature,
we come to see that conscious sexuality, far from being an
obstacle, can be a powerful part of stepping onto a transformative path

TO PURCHASE:  THE SEXUAL SHAMAN DVD

A clip from the documentary

Known today sometimes by such names as “sacred intimate,” “tantrika,” “daka/dakini,” “sexual healer,” “sacred whore,” “tantra teacher,” or “sexual shaman,” women and men in contemporary versions of the sacred prostitute present their lives and their evolution into a role that would have been revered in many ancient and not-so-ancient cultures.

The contemporary sacred prostitute no longer has a public temple where she or he can share the ceremonies openly. There is little or no lineage down through which the sacred mysteries can be revealed from high priest/ess to initiate. Legally, socially, religiously, the sacred prostitute has been out in the cold — until now!

TO PURCHASE:  THE SACRED PROSTITUTE SET

WOMEN OF THE LIGHT:
THE NEW SACRED PROSTITUTE

Women of the night—women of the light:
the sacred prostitute,
the temple priestess,
the sexual healer,
the embodiment of the archetypal Goddess.

Who is she today?

Without a continuing lineage, without a temple, the contemporary sexual initiator/healer/teacher has many faces. Today she is

Nine women share their work, their lives, and their insights. Their personally written stories in this book bring us to a deeper understanding of our sexuality and our humanity.

TO PURCHASE:  WOMEN OF THE LIGHT:  THE NEW SACRED PROSTITUTE

THE SHAMAN CARDS:
Ceremonies for Energy and Wisdom

A shaman is a person who has the ability
to function through other dimensions of existence
intrinsic to our physical, incarnated dimension.

If we want to function through these dimensions,
we must first access them and the wisdom of their nature.

Focusing our intent in the Energy-Wisdom Ceremony with these cards
enables us to do this, thus increasing our abilities to transform and heal.

Each of the 20 cards consists of an exterior circle with a representation of each of the 4 “worlds”: a plant, an animal, a crystal, and a human. The humans depicted vary by age, gender, genetic pool, and condition. In the center of each card is an abstract concept, which also serves as the name of the card. The background painting is there for natural beauty.

TO PURCHASE:  THE SHAMAN CARDS

SHIFTING-TURNING DRAGON
With the woman lying on her back, the man kneels and lifts her feet, bringing her knees to her chest. Then with his right hand, he masterfully advances his Jade Stalk deeply through her Jade Gate.

SKY-SOARING BUTTERFLY
The man is lying on his back with his legs straight. Facing him, the woman squats, straddling his pelvis. As desired, she warms his Ambassador and then guides it through her Jade Gate.

SEAGULL SOARS
With the woman lying on the end of a high bed, the man stands facing her and elevates her legs to rest on his chest and shoulders. He thrusts his Jade Column deeply into her Cinnabar Hole.

MONKEY SPRINGS
Lying on her back, the woman rests her thighs on the man's arms or chest. He inserts his Jade Bamboo Shoot and presses her thighs to her chest or to her side.

TORTOISE MOUNTS
Lying on her back, the woman bends her knees while the man pushes her feet. His Jade Stalk inserted, he pleasures her with both deep and shallow thrusts until her body shakes and lifts, and her emission fluid erupts.

From Chinese antiquity comes the mythical Yellow Emperor. In exquisite detail and without any shame, the three “Women of Sexual Knowledge” enlightened the Emperor in Taoist sexual secrets and the arts of love-making. Based on the 1,000-year-old Japanese Ishimpo text, the 50 cards here present the sexual positions they taught the Yellow Emperor.

A 30-volume treatise on ancient Chinese medical practices, the Ishimpo included an extensive section on sexuality and uniting the man’s “jade peak” with the woman’s “jade gate.” The text was completed in 984 by Tamba Yasuyori, a Chinese physician living in Japan. Popular for many centuries in Japan, the text eventually lost favor, and even the section on sexual practices was censored during some periods.

The Ishimpo presented the sexual practices as essential ways to heal the human body and to increase one’s vitality. In these cards, the artist and I have adapted the art and text for contemporary lovers.

EARLIER BOOKS, DVDS, AND CARDS
available at a major discount when purchased as a set
The perspectives in the Path of the Sexual Shaman are an evolution of what I wrote and taught over three decades. Representing that evolution, these sets of my earlier creations are practical techniques with a tantric undertone for lovers to enhance their sensual, sexual, and intimate connection. – KRS

• Secret Sexual Positions book •
“This celebratory-and very explicit-treasury of 100 positions you absolutely, positively have not experienced (and if you have, you are getting out more than we are!).” Quality Paperback Book Club
“Even if you think you have done it everyway possible, I bet you will find some new ways to bend in here.” – Libido: The Journal of Sex and Sensibility

The T-shirts are not available at this time. COME BACK LATER, PLEASE.

If you really like the Rattlesnake Spiral image, it is availabe in 2 different styles of all-cotton T-shirts.