Menu
Be A Patron
ADD ME TO EMAIL LIST 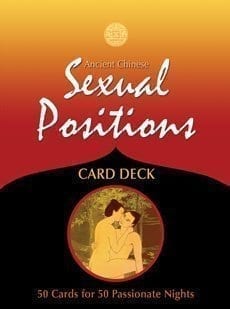 Examples of descriptions on the back of each card

With the woman lying on her back,
the man kneels and lifts her feet, bringing her knees to her chest.
Then with his right hand, he masterfully advances his Jade Stalk
deeply through her Jade Gate.

The man is lying on his back with his legs straight.
Facing him, the woman squats, straddling his pelvis.
As desired, she warms his Ambassador and then
guides it through her Jade Gate.

With the woman lying on the end of a high bed,
the man stands facing her and elevates her legs
to rest on his chest and shoulders.
He thrusts his Jade Column deeply
into her Cinnabar Hole.

Lying on her back, the woman rests her thighs
on the man’s arms or chest.
He inserts his Jade Bamboo Shoot
and presses her thighs to her chest or to her side.

Lying on her back, the woman bends her knees
while the man pushes her feet.
His Jade Stalk inserted, he pleasures her with
both deep and shallow thrusts until her body shakes and lifts,
and her emission fluid erupts.

From Chinese antiquity comes the mythical Yellow Emperor. In exquisite detail and without any shame, the three “Women of Sexual Knowledge” enlightened the Emperor in Taoist sexual secrets and the arts of love- making. Based on the 1,000-year-old Japanese Ishimpo text, the 50 cards here present the sexual positions they taught the Yellow Emperor.

A 30-volume treatise on ancient Chinese medical practices, the Ishimpo included an extensive section on sexuality and uniting the man’s “jade peak” with the woman’s “jade gate.” The text was completed in 984 by Tamba Yasuyori, a Chinese physician living in Japan. Popular for many centuries in Japan, the text eventually lost favor, and even the section on sexual practices was censored during some periods.

The Ishimpo presented the sexual practices as essential ways to heal the human body and to increase one’s vitality. In these cards, the artist and I have adapted the art and text for contemporary lovers.

available at a major discount when purchased as a set The perspectives in the Path of the Sexual Shaman are an evolution of what I wrote and taught over three decades. Representing that evolution, these sets of my earlier creations are practical techniques with a tantric undertone for lovers to enhance their sensual, sexual, and intimate connection. – KRS

• Secret Sexual Positions book •
“This celebratory-and very explicit-treasury of 100 positions you absolutely, positively have not experienced (and if you have, you are getting out more than we are!).” Quality Paperback Book Club

“Even if you think you have done it every way possible, I bet you will find some new ways to bend in here.” – Libido: The Journal of Sex and Sensibility